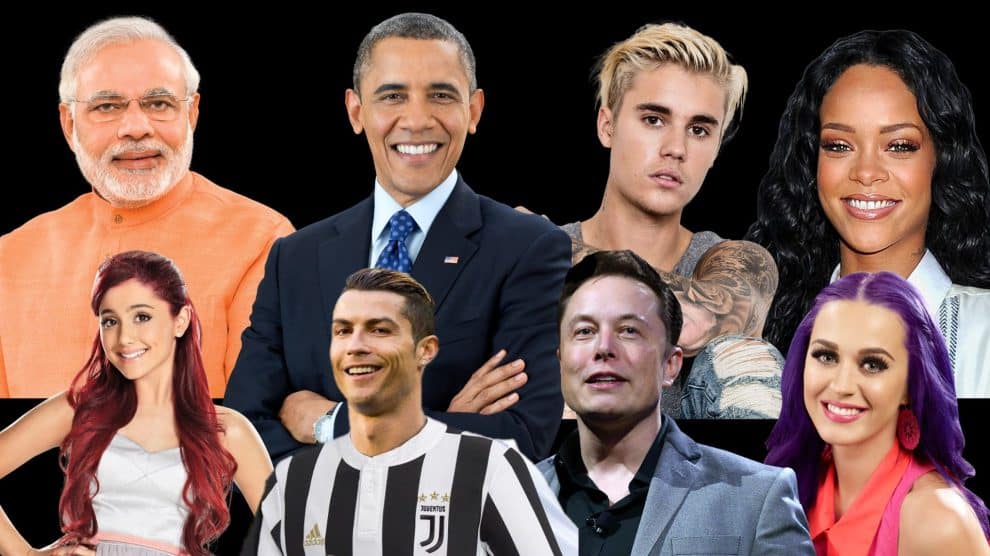 Twitter can go down as one of the most popular social media platforms of the 21st Century. It is a micro-blogging site that lets its users post status updates and texts of up to 280 characters. It is one of the sites that provide instant access to the lives of celebrities. These celebrities get a verification sign which means that the account is maintained by a legitimate source. This article enlists the 12 Top Twitter accounts in 2022.

YouTube is the most popular online video-sharing site on the internet. It has its headquarters in San Bruno, California, and was founded on the 14th of February 2005. It is the 12th most-followed account on Twitter as of 2022. The primary content it shares is related to its site mostly. Its current Twitter following is 75.4 million.

Ellen DeGeneres is an American TV personality, comedian, writer, and actress. It is undoutedy the most popular account on Twitter. She is famous for “The Ellen DeGeneres Show” which is a daytime TV show which features various famous personalities in each episode. Ellen is the 11th most followed personality on Twitter as of 2022. The current following of The Ellen Show on Twitter is 77.4 million.

The next on our most followed on Twitter list is Lady Gaga. Stefani Joanne Angelina Germanotta, famously known as Lady Gaga is an American singer, composer, and actor. She is known for a lot of her famous songs and albums and has been felicitated with renowned awards like Grammys. She is the 9th most followed personality on Twitter as of 2022. The current following of Lady Gaga on Twitter is 84.7 million.

Taylor Alison Swift is an American singer, composer, songwriter, actor, and producer. She is one of the most popular pop stars of the 21st Century. Taylor has produced multiple hit songs and best-seller albums as well. She is the 7th most followed person on Twitter as of 2022. The current following of Taylor Swift on Twitter is 90.3 million.

Elon Reeve Musk is a business mogul and an investor. He is the CEO and founder of SpaceX. Elon is also an angel investor and also one of the architects of Tesla inc. He is also the wealthiest person in the world. As of 2022, he is the 6th most followed person on Twitter. His current Twitter following is about 99.1 million.

Cristiano Ronaldo dos Santos Aveiro is a Portuguese footballer and he plays forward for Portugal’s national football team. He also plays for the football club Manchester United. Ronaldo is one of the most renowned sportsmen in the world. He is also one of the highest-paid players. He is the 5th most followed person on Twitter. His current Twitter following is about 101.1 million.

Robyn Rihanna Fenty, famously known as Rihanna is a Barbadian singer, fashion designer, composer, businesswoman, and actor. She is one of the greatest RnB singers of all time. She has produced a lot of hit singles as well as albums of all time. Rihanna is also famous for her cosmetics line Fenty Beauty. She is the 4th most followed personality on Twitter in 2022. Her current following is about 106.2 million.

Katheryn Elizabeth Hudson, famously known for her stage name Katy Perry is an American pop star, songwriter, actor, and TV star. Katy Perry is a well-known personality in the USA, mostly for her hit songs. She has had a lot of hit songs of all time and has also received a lot of awards for the same. She is the 3rd most followed person on Twitter in 2022. Her current following is about 108.9 million.

Justin Drew Bieber is a Canadian pop star. He is very famous all around the world for his hit songs. He has made a lot of records and history with his music at a very young age. Justin is the 2nd most followed person on Twitter in 2022. Her current following is about 114.4 million.

Barack Hussein Obama II is an American political leader who also was the 44th president of the United States. Obama was the first African-American to be elected as the president. He belongs to Democratic Party. He is the most followed personality on Twitter as of 2022. His current following is about 131.4 million. It is one of the most followed Twitter accounts

Twitter is a very popular platform that has a lot of users. The power and influence these famous people have on the normal population are quite impactful. You can check their account anytime on Twitter. These were some of the Top Twitter accounts in the world