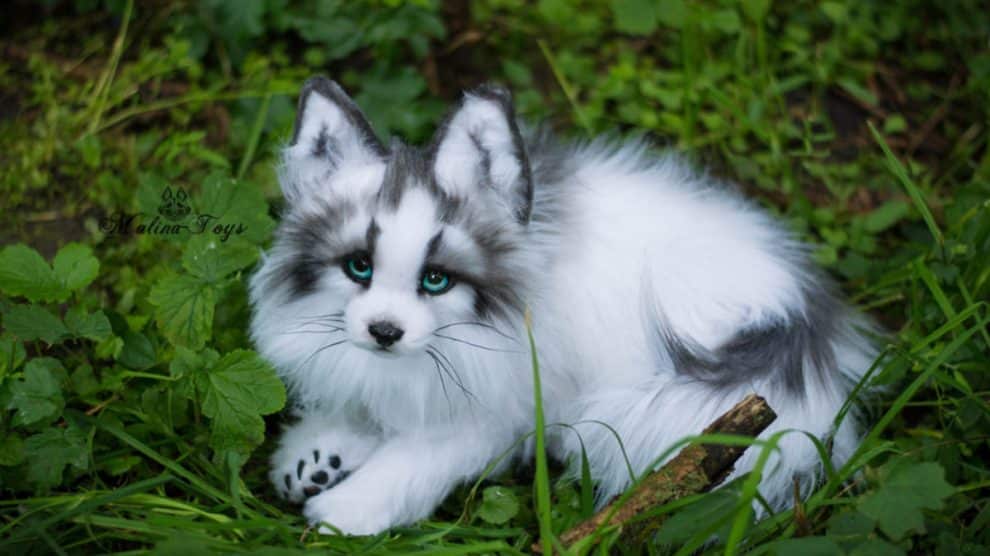 Whether you ask most people if they’ve ever heard of a Canadian marble fox, they’ll either answer no or believe it’s a legendary creature from a fantasy film that appears creeping through the woods at a precise point in the plot. The marble fox, as mysterious as it seems, is a real creature. These exotic creatures, like wolves, are part of the canine family but are wild animals. Foxes, unlike wolves, do not hunt in packs; instead, they prefer to hunt alone. Because they originate from Alaska or the Canadian region, the exotic marble fox, also known as the arctic marble fox, can adapt to the cold and live in the wild for 3-4 years.

Not far from mythological proportions, this breed was created by man’s influence rather than natural selection. Their coats comprise thick white fur that covers the majority of their bodies. Around their ears and, on some, around their eyes, like a burglar’s mask, varied color mixtures of grey blacks intertwining within themselves like marble (or sometimes a brownish color); hence their name Canadian marble fox. People also recognize them for their peculiar sharp muzzles and hairy tails.

There are numerous fox species, each with its own personality. As with humans, each of these distinct species has a diversity of colored fur, indicating that they are not all the same but all lovely in their way. Canadian marble foxes are found in a variety of colors all around the world. Some have brown fur with grey dots, tan coats, or the notorious red fox hue, a reddish-orange, typically portrayed in fairy tales and children’s stories, often playing a clever or devious role.

Some Facts About The Canadian Marble Fox

The Appearance Of Marble Foxes

Canadian marble fox crossbreeds are distinguished by their distinctive coat shades. The grey, black, silver or brown marks around the eyes and forehead stand out against the primarily white fur. These marks can sometimes be visible down the back and on the tail. Aside from that, they have all the characteristics of a classic fox, such as upright, pointed ears, a long body, a large nose, and a thick, bushy tail.

In comparison to the red fox, the Canadian marble fox is often smaller. A male can weigh up to 21 pounds and stand up to two feet tall, although a female is often much smaller, weighing approximately 8 pounds and standing around two feet tall. It is around the size of a small to medium-sized dog.

The marble fox cannot be termed as a domestic animal, even though humans purposely created it. The marble fox possesses all of a wild fox’s behavioral irregularities and qualities, but the domesticated dog has had many of its violent impulses bred out. And, like with any wild animal, keeping them as a pet would be impossible without first understanding and planning around many of their natural impulses.

The Canadian marble fox is a type of solitary animal that would live and hunt alone or in tiny family groups in its natural habitat; unlike other canine species, it does not form a pack. Nonetheless, these are highly expressive animals who can interact through facial expressions, vocalizations, and scent markers. Foxes use glands in their tails, faces, and foot pads to send critical signals, and they also use urine, feces, and secretions to gather information about one another. In addition, more than two dozen other calls have been identified, including the well-known yips and whines. These aid in the communication of the fox’s emotional condition and additional pertinent information about the world.

The fox has its domain in the wild, which is a few square kilometers in size. An adult male, one or two adult females, and their progeny share this territory. Most foxes live in underground dens connected to resting spots, food storage areas, and hunting fields via a sophisticated network of routes and tunnels. These are either dug directly by the fox or inherited from another animal. The foxes typically come out of the den to hunt for prey at night or during the twilight hours. The fox’s natural living arrangement is interrupted or reduced after being raised in captivity. Hence they do not always display these habits.

Kits are the name given to all newborn foxes.

In captivity, a Canadian marble fox usually survives for 10 to 15 years.

Marble foxes can weigh anything from 6 to 20 pounds.

Canidae is the same taxonomic family as foxes and wolves. So, while they have genetic similarities, they have a lot of distinctions. Foxes, for example, are much smaller than wolves. Wolves also hunt in packs, whereas foxes are solitary hunters.

Red meat, chicken, vegetables, fruits, and some dog meals are among the foods consumed by foxes. They enjoy sweets, but most owners recommend just giving them once a month.

Some canines can stand being tethered outside for long periods; however, foxes are unable to do so.

Some Canadian marble foxes do bark like dogs. It’s a somewhat distinct sound, which people frequently describe as “more wild.”