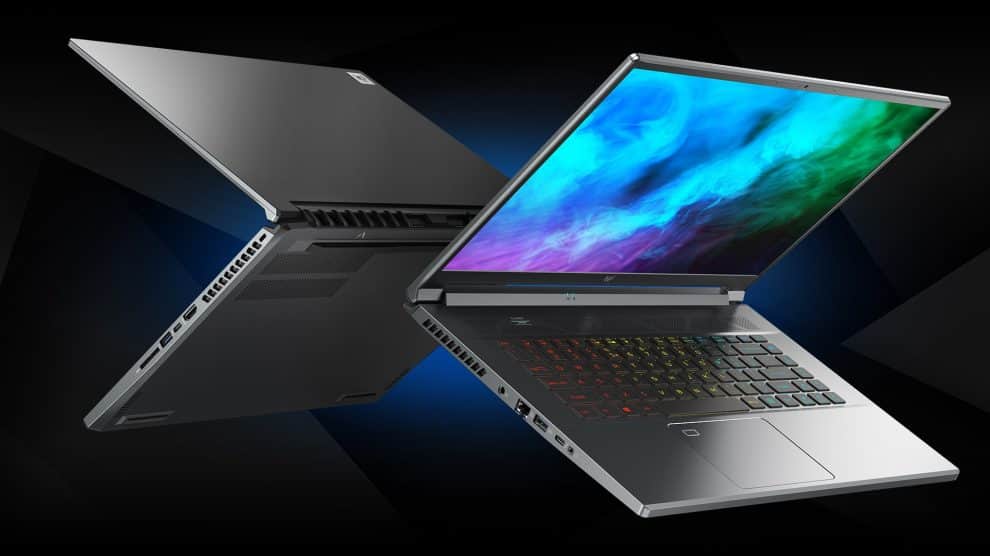 The Acer Triton is a refined gaming powerhouse with a sleek body and it’s away from all the unnecessary bling. One of its main features includes the massive 16-inch screen. The 16:10 aspect ratio makes it ultra-immersive while playing and working. And this is the reason behind Predator Triton 500SE being a hefty 5.3 pounds heavy. But it is still better than the others (Razor Blade 17 weighs 5.5 pounds). The 240 Hz WQXGA model is a perfect blend of sharpness and smoothness. Although HDR support isn’t there, it offers a full DCI-P3 gamut coverage and 500 nits brightness.

The latest RTX 30-series GPUs of NVIDIA and the 12th-gen CPUs of Intel are like cherries on the top up to RTX 3080 Ti. The smart swapping of Triton’s GPU between discrete and integrated graphics is one of its highlights. You can change it manually using MUX as well. The 240Hz display shines as well when the graphic settings of the game are lowered for reaching higher frame rates.

Next comes the easy built-in overclocking that the Acer Triton 500 SE provides. It lets you tweak thermal profiles as well as clock speeds easily. Gearheads will probably find it really exciting even though the ‘Turbo’ button on the keyboard was more than enough.

In a few instances, such as Geekbench 5 and PCMark 10’s computer test, Razor got the lead. Otherwise, our Acer Predator Triton 500 SE was a triumph in all others including Port Royal ray tracing of 3DMark and Cinebench R23.

It doesn’t get heated up much even after playing or working on it for several hours continuously. The GPU hits 83 Celsius and the CPU hits 78 Celsius generally.

It provides a whole lot of ports as well including dual USB-C Thunderbolt 4 ports, Ethernet, HDMI, two USB 3.2 type A connections, and an SD card. The headphone jack continues to be there as well

Talking about the drawbacks, the keyboard could be a bit more comfortable. And while the trackpad is large and smooth, the clicking mechanism is relatively a bit too stiff. The Predator Triton 500 SE could also do more than the tinny stereo speakers it provides. The Acer Predator Triton 500 SE battery life is another cause of disappointment which lasts just for about five and a half hours involving an HD video loop.

What Is Rob Kardashian’s Net Worth as of 2022?
When will Netflix release All of Us are Dead Season 2?
Comment